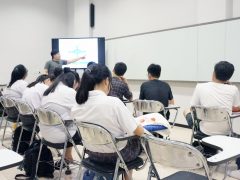 No education budget means parents will have to pay for after-school activities and music provision, the principal of one Northern Ireland primary school has warned.
Kevin Donaghy, from St Ronan’s Primary School in Newry called the situation faced by the school a “crisis”.
In a letter to parents, he said politicians had failed to “put aside old animosities and work for the benefit of our children”.
He also warned of “devastating cuts”.
“It was widely hoped that the different political parties would, for the betterment of all, be able to put aside their differences,” he wrote.
“Unfortunately we see that this continued failure to reach an agreement means that education will now not have a budget.”
The letter – headed “schools in financial crisis due to NI Executive failure to set a budget for education” – has been sent to the parents of all 390 pupils in the school.
In it, Mr Donaghy told parents that he has to make a further £46,000 of cuts in 2017-18, having already saved £30,000 in 2016-17.